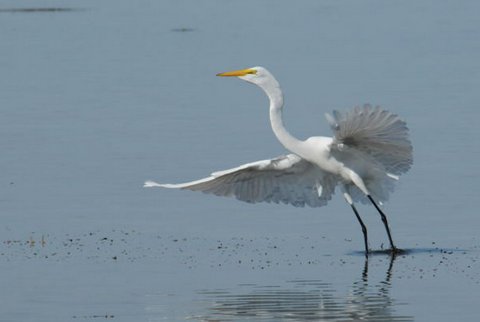 We are very fortunate to have our fair share of feathered friends that make coastal bird watching in St. Augustine quite easy. As we follow our route through the waters around the old town, some of the water birds you might encounter include the Least Tern, Great Egret, Snowy Egret, and even the Roseate Spoonbill.

As we approach the Castillo de San Marcos heading toward downtown St. Augustine, Captain Russ will point out a little island locally referred to as “Bird Island.” During spring and early summer, you’ll notice the island has markers and ropes cordoning off the middle areas of the small spit of land. We tend to think of that for turtle nesting but in this case, the markers are protecting the nests of the Least Tern.

These little shore birds, the smallest of all terns, begin nesting in Northeast Florida around May. They tend to nest in colonies and create their nests directly in shallow impressions made in the sand. The barriers are meant to keep people out, since the eggs are small and vulnerable to disturbance.

Least Terns are great fisherman – you’ll see them diving into the water all around the island to catch small fish.

While we tend to see the Least Terns around Bird Island mostly during nesting season, we’ll often spot a Great Egret along the water’s edge just about anytime of year. These beautiful and elegant birds don’t dive like their island-mates the terns, but instead stand completely still waiting for lunch to swim by. When it does, they stab it with their beaks at unbelievable speed.

During the spring and early summer, Great Egrets are nesting like most of their counterparts. Unlike the Least Terns, though, egrets like to build their nests high off the ground, often in trees along the water.

Of the six spoonbill species in the world, the Roseate Spoonbill is the only one native to North America. While we don’t see these colorful creatures as often as egrets, we do see them along the shoreline. If in the water, they’re often moving their head from side to side skimming the bottom for the crustaceans that give them their color. Seeing them in flight, it’s easy to see why folks confuse them with their pink counterpart, the flamingo.

Tip: You can see native birds nest at the Alligator Farm Zoological Park here in St. Augustine. The park has hundreds of nesting birds during the season.

Seeing Birds from the Boat

When you join us for a tour, we will make sure to point out the birds highlighted here, along with other birds that frequent the coasts, such as Ospreys and Brown Pelicans. To help in your coastal bird watching, you can bring binoculars if you’d like, but our feathered friends are quite visible from the open layout of our boat with just the human eye.