The Story of the Castillo de San Marcos 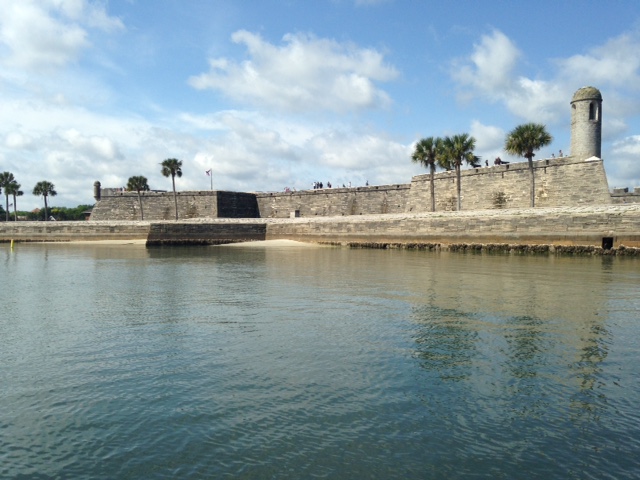 Like all of the historic sites in St. Augustine, the story of the Castillo de San Marcos is one of layers and layers of actual history mixed with a good dose of local lore. In this article, we’ll take a look at some of the top questions we receive about the fort, Saint Augustine’s most famous landmark, officially named the Castillo de San Marcos. (And we’ll stay mostly on the “actual history” side of the equation).

Will we see the Castillo de San Marcos from the water?

Absolutely. The fort is on the waterfront of historic Saint Augustine and one of the highlights of our tours. Unlike large vessels with a deep draft (the amount of boat under the water), we can cruise very close to the actual sea wall, so you have an excellent view of the fort as it would have been seen from friend and foe alike approaching the fortress from the water.

Tip: If you join us on Friday, Saturday, or Sunday for our Wildlife & History Tour, most mornings we are able to witness the cannon firing reenactment.

Why was the Castillo built?

Under the Spanish crown, the fort was built between 1672 and 1695 to help counter the British military pressure from the north. The impoverished outpost of Saint Augustine had also seen a devastating pirate raid in 1668, one in which English pirates had ransacked the town. Saint Augustine was also a keystone in the defense of Spanish galleons traveling from Spanish territory to the south (Mexico and Peru) carrying gold and silver from the mines to the crown in Spain. The fort was seen as a necessary piece of defense to protect this wealth.

What is the Castillo made of?

It was a stroke of genius when the Spanish decided to construct the fort from coquina, (Spanish for “little shells”.) Found along the east coast of Florida, coquina is the result of a natural process whereby the tiny coquina clam (donax variabilis) is broken and compressed and cemented in its own sort of lime. The coquina replaced the local wood previously used, which was susceptible to rot, termites, and storms. On nearby Anastasia Island, you can still visit the coquina quarry, where stone masons cut the coquina into blocks for loading onto rafts that were than floated across Matanzas Bay to the construction site.

Has the fort ever been attacked?

Yes. For all of the efforts to construct the fort, it does not have a long history of attacks, but a significant assault did take place in 1740. English General James Oglethorpe launched what would be a month-long assault on the Spanish outpost. The coquina walls withstood the bombardment. Unlike wood, the coquina could actually absorb the shock of cannon fire to some degree, somewhat like shooting a BB gun pellet into styrofoam.

Who takes care of the fort now?

We are fortunate that the Castillo is part of the National Park Service. In 1933, the United States War Department formally transferred administration of the fort and its grounds to the park service. It remains a national park to this day.